May 10, 2020
I just started a batch of six Algox Archers on my Prusa SL1 and came to a bit of a realization: I love my resin prints, but I really dislike running the resin printer.  This isn't a complaint about the machine, as it's really incredible, but I just really prefer using my MK3 and wanted to write out my feelings on SLA vs. FDM printing.

The biggest driver for me is the consumables on the printer itself.  The major consumables on my FDM printer are the nozzles and the printer bed.  Because my printer has a magnetic printing bed, replacing it is trivial, so no worries there.  Also, since I just print in PLA and never scrape the bed with any tools (I just flex it to release my prints), it's still in great shape and shows no sign of needing replacement.  I have replaced my nozzle several times, and while it's a bit dangerous to work with ~250 degree bits of metal, I have yet to burn myself and the overall process isn't that difficult.  Also, nozzles are relatively cheap, so I don't really mind replacing them as needed.

On my SLA printer, the major consumables are the FEP film, the LCD Display, and the UV LED Array.  Replacing the FEP film on the bottom of the tank is no big deal; it takes only a little longer than replacing a nozzle on my FDM printer and has a comparable cost.  It's a little more arduous (there are a LOT of screws on the tank!), but I think that's balanced out by not having the risk of a hot nozzle rolling around.  The LCD and LED components are another story, though.  I haven't had to replace either yet and haven't found them on the official Prusa store, but a similar LCD for another printer costs around $100 USD.  When the time comes, installing it isn't going to be super easy, either.  The LED will probably be cheaper, but once again, replacing it is going to involve tearing open a lot of the printer.

So, I don't like the consumables.  Every time I run a print job on my SL1, I imagine a little durability bar depleting and know that, when it gets to the bottom, I'm going to have a lot of work ahead of me (BTW, according to the expected lifespan of the LCD, I'll get about 100 prints out of it... so that imaginary bar drops by 1% with each job).  When my MK3's equivalent bar drops down to 0%, it's not that big of a deal to refill it.

When I print something on my FDM printer, I can watch the whole print job if I'm so inclined.  I can (and do) watch the first layer go down to make sure that nothing funky happens, as that's a key layer to getting a successful print and the machine can damage itself if something goes really wrong there. 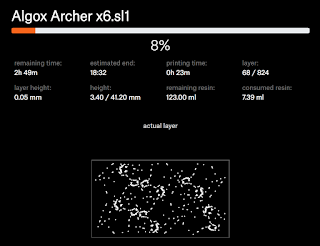 On my SL1, the print is hidden behind the UV shield (for my own safety) and, even if it wasn't, I wouldn't be able to see very much anyway as all of the action is happening in the vat where it's obscured.  The best that I have is the real-time monitor, but that only tells me what the printer is doing, not what's actually happening.  If some bit of the first layer failed to release from the FEP film, there's no way for me to know that the whole print is ruined until it completes and I can see the failure (which very well might be over-cured resin that damages the FEP film... or worse).  That means that I just spent 1% of my printer's durability (and a fair amount of resin) on a 3 hour print that, with better information, should have been aborted in the first 5 minutes.

But, there's also the materials to consider...

FDM printing can use many materials, but I'm going to focus on PLA because it's the most common and it's all I've ever used.  PLA is pretty easy to handle safely, you just grab it and put it where it needs to go.  Keep it away from humidity (which is admittedly more difficult in some parts of the world than it is where I live) and it'll be fine.  There are some concerns about VOCs from FDM printers during print jobs, but as long as you're not living in the same room as a printer farm, it seems like they're not super dangerous (I am not a doctor or a scientist, so do your own research on that one!).

SLA printing, on the other hand, involves some potentially dangerous chemicals.  The resin itself will become an irritant if you are exposed to it enough, so you need to wear gloves when you handle it and avoid inhaling its fumes.  Because of the danger that the resin represents, you need to be fairly thorough and careful during your cleanup process.  That cleanup process is probably going to involve large quantities of Isopropyl Alcohol (although there are some resins that are water-washable), which isn't the most dangerous stuff in the world but still presents some risks.  This IPA also represents an additional material cost for running the SLA printer, which is already more expensive than running the FDM printer. 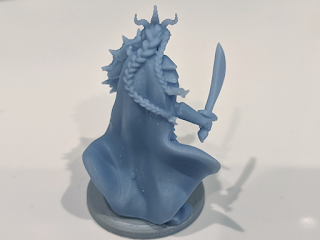 Well, at the end of the day, it's all about the print quality.  I mostly print tabletop gaming pieces, and while my MK3 can produce some really nice miniatures (especially with a 0.25 mm nozzle on it), the SL1 blows it out of the water.  The amount of detail that I get out of the SL1 is staggering, you can even see the loose hairs at the end of my Inox Brute's braids.  That model is tiny, and those details are vanishingly small... but when you pick it up to appreciate how cool it looks, it is really nice to see them!

Another benefit to SLA printing is the time requirement per model.  A high quality print on my MK3 will take somewhere between five and eight hours per model (that's with the 0.25 mm nozzle printing with 0.07 mm layers), and the only real benefit to printing multiple models on a single sheet is that you can let the printer run longer without needing to clear the bed for the next job.  SLA printing cures an entire layer of the printer bed at once, so there's literally no printing time difference between printing 1 copy of a model and printing 6 copies of that same model.  So, you can jam as many models as you can possibly fit onto your SLA printer's bed and the total printing time will be from how tall the tallest model is.  All of those other models were "free" from a print time perspective.

Is a resin printer worth it?

Well, the only true answer to that question is the boringly safe answer: it depends (and will change from person to person).  In my case, if I were just printing pieces to bring out to the table with my friends, I think that the FDM prints from the 0.25 mm nozzle are plenty good enough, especially once they're painted.

When I pulled out some new model that I'd FDM printed & painted, my friends were suitability impressed.  They'd pick it up and enjoy the details for a few moments, pass it around... then set it back down on the table so that we could get on with the game.  While my SLA prints are undeniably better than my best FDM prints, I guess that my friends and I are just not picky enough to really need that higher quality.

But of course, I don't only make models for myself to go on my own table.  I also share them with you guys, and I'd be lying if I said that there isn't a bit of emotional pain when I make some cool model that I'm really proud of and then upload a photo of it printed with the 0.4 mm nozzle on my FDM printer.  Those prints looks fine on the table, but the cool details aren't there and the printing artifacts really show when when it's all zoomed in for the "glamour shot".  When it comes right down to it, I want to show off my work, and the SLA print does an amazing job of that.  So, while the SLA printer probably isn't worth it for me as a gamer, I think that it's absolutely worth it for me as a content creator.  But, that's just me, and in some ways, that's a manifestation of the coolest thing about 3D printing.  We are all makers and can all tweak the models and our gear to create the objects that we want in the way that we want them.  My answers may not be right for you and that's just fine!
3D Printing Prusa MK3 Prusa SL1

Popular posts from this blog 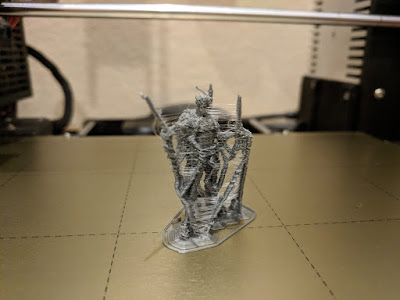 I've had a Prusa MK3 for several weeks and have printed nearly a kilogram of upgrades for my boardgames.  Most of that has been terrain features, which have printed beautifully at 0.1 mm layer height (check out the things I've made for some examples).  Sure, the print lines are visible (especially after applying a wash), but I'm still very happy with the results.  I haven't been so happy with attempts at printing miniatures at 0.05 mm layer height.


I was vexed to find that 0.05 mm layer height prints on my brand new printer looked like garbage.  They were so covered with strings that I couldn't even remove the support material.  Admittedly, they'd be pretty awesome if I exclusively played campaigns in the Mirkwood, but that's really not what I'm going for.

I tried all sorts of things to resolve the situation, and some certainly helped.  I lowered my nozzle temperature from 210 to 200 degrees.  I adjusted my printing speeds so that they'd max out at …
Read more 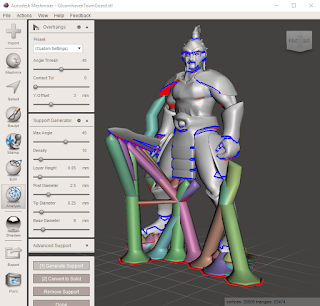 I've written tidbits of this information across a few other support-related posts, but I figured that I should put it all in one place.  I've been printing a lot of minis lately, which has meant that I've had to learn a lot about supports and 3D printing.  I use a Prusa MK3, so this post is focused on FDM supports.  I tried a lot of different support structures across several different programs and my favorite ones were tree supports in Meshmixer.  I know many others have had excellent results with other supports, but I've been happy with my results and so that's what I'm going to write about :P 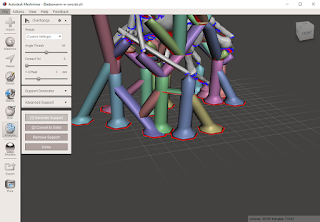 I've been working on a character lately with a bunch of swords, like a whole lot.  This model has been especially challenging to print, because those swords stick off of the model at all sorts of odd angles, meaning that they need a lot of support material.  I prefer to use Meshmixer Tree Supports for my minis, as the individual trees can snake around complex geometry and they come off pretty easily and leave very little marking where they were connected.  That said, there are some challenges that I have to overcome when using those supports.

Minis often need some fairly long supports, in order to print some weapon or head detail that is high above the printer bed.  Tree supports are often leaning at some precarious angle, and I've run into issues where the support will lift slightly as it cools, but due to its length and angle that imperceptible lift gets magnified and causes a nozzle collision.

To work around this, I make support for my support.  I try …
Read more

If you enjoy my work and have a few dollars to spare, please consider supporting me over on Patreon!